We’ve been Jonesin’ for green chile cheeseburgers since New Mexico, and we finally got them here in Wickenburg, AZ, at Screamers Drive-in.  Unlike that chick whose review claimed they stopped in only because the place went by her boyfriend’s nickname, I’m going to give you the straight dope on Screamers:  it’s named for classic muscle cars.  That means GTOs, Shelby Cobras, Corvettes, the Chevy 409’s, and the later Chevy SS family.  45 rpm vinyl hangs on the wall alongside autographed pictures of various local drag and dirt-track racers.

So much for the name: now on to the food.  It’s an old style burger joint where they cook the beef on a stainless steel griddle, scraping it clean between batches.  The green chiles (Anaheims) go onto the grill and do their time while the Kraft American slices melt atop the just-turned patties.  The buns go there in groups of a dozen, and somehow two cooks keep it coordinated and fairly fast.  They deep fry an excellent floured and seasoned French fry box – one order feeds three — and the onion rings looked pretty good too.  For $15 we had an excellent lunch, which was so much food there was room only for cheese and crackers as dinner.

Kat heard good things about Anita’s Cocina and we tried it a couple of days later.  I got to see Jose Fernandez pitch the Opening Day Rockies-Marlins game.  Kat ordered the Chimichanga plate and I had a Green Chile Burro Dinner, which came with beans and rice.  A burro is just a larger burrito, and this was one big boy.  Some was left for Pinky’s dinner seasoning, and it seemed good enough that she forgave us for leaving her in the trailer while we visited Anita’s.  We had one regret:  we should have ordered a Desert Pear Margarita.  I don’t even know what a desert pear is, but doesn’t it sound good?

I finally got around to stirring up the corned beef and cabbage we’d bought for St. Patrick’s Day.  I used Ree Drummond’s idiosyncratic recipe in which the beef is roasted slow and low, and the cabbage is sautéed then served with a balsamic sauce drizzled over the browned wedges.  It makes a superb corned beef dinner, and if you’re interested, here’s a link to her recipe. 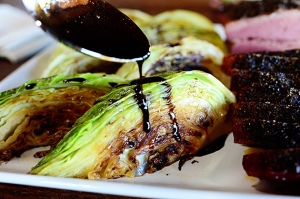 Tonight we’re doing Jamaican Jerk Chicken over charcoal under a grill hood.  I’ll use indirect heat, and you know that’s gonna be some good.