We were tent campers back in the 80’s. Home was north Louisiana and most of our weekend escapes were to the cooler climate of Arkansas. Our favorite camps were Albert Pike, Mount Nebo, Cassatott, and Lake Greeson. We canoed the Ouachita, the Buffalo, the Caddo, and the Mulberry Rivers. We hiked all kinds of trails, usually following our daughter Stephanie the Pathfinder, who even in kindergarten had an uncanny knack for finding trail markers – and more usefully — restrooms in stores and restaurants.   When possible we’d catch a ranger talk, then interrogate him (lady rangers were then rare) upon its completion. An often-asked question was “Which groups of campers cause the most trouble?” Sometimes the answer was “Motorcycle gangs”, but more often we heard “Church youth groups”.   That second one always prompted a follow-up. “How can church kids be more trouble than bikers or drunks”? We would then hear a variation on this theme: “Most of those kids live tightly controlled lives, but when they break free, they have all kinds of steam to blow off. Without their parents around they just run wild.”

Our first church group function was held in the Big Pavilion at Stuart this Sunday. We get advance notice of reservations, and you should have heard me and Kat wailing and gnashing teeth upon receipt of those tidings.   Even Pink was making funny noises, but she’s an incredibly intelligent dog – her vocalizations may have been glossolalia.

Come Sunday, the caterers fired up 50 pounds of charcoal at 8:00 a.m. The menu was roast pork loin, baked beans, potato salad, with assorted desserts brought by the church ladies. The sermon began at 10:30 and ended with benediction an hour later. It was more than a youth function; this was the annual church picnic for all its members. (Sound effect: big sigh of relief.) There was no beer or wine in sight, nor in the garbage. The Alliance Church cleaned up very well afterwards, and only the caterers were rude (they insisted on parking on the grass), but Kat laid down the law, and soon, them old boys sho ‘nuff got the religion!

After the cake walk the congregation paraded down to the river for a rare in-nature baptism. First came a prayer, followed by a story about a modern-day martyr for Christ. Here’s the Readers Digest Condensed version. “Andy was born Ahmed, a Muslim, but as an adult he converted to our Protestant faith. A fatwa fell upon him for his blasphemy to Islam, and in time the infidels murdered this new Christian. Loving Jesus is dangerous my friends, but fear not, for we are in God’s hands. He will protect us in our time of need.” They sang a hymn, and while I expected Shall We Gather at the River, the preacher chose something modern, with several exhortations of “Yeah!”

Then the preacher waded out into the near flood stage Shavers Fork. The current was firm, so he didn’t venture into the deeper water. Several youngsters were baptized, then a grown woman he had saved for last. She was bigger than him, and controlling her in the current was all he could manage. Someone in the crowd murmured, “Oh, what about her glasses?”   Sure enough, when she come up they was gone. 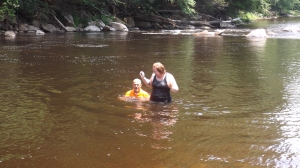 Apparently the laws of physics apply everywhere. Even to baptisms.

4 thoughts on “The Church Group and a Two-Handed Dunk”