The Sunday funnies have been wonderful lately.  The one above recaps Kavanaugh’s second hearing by speculating on juvenile emotions that are not so unlikely.  The tiny selection following is a commentary on our misruled nation, and we mean it as a bugle call to all Americans who know we can do better than we are now.  You need to vote by mail now, while it’s convenient.  If it’s already too late for that, then find your umbrella, and put it in your car so you can vote in person November 6.

Tom the Dancing Bug (above) laments life after the current administration’s policies have further widened the gap between Haves and Have Nots while exploring the emotions that have driven that divide.  That of course is not where the story ends – those tax cuts for the super rich and big business if not repealed will curtail social services, including “entitlements” such as Social Security and Medicare.  They are called that only because we have already paid for those benefits and consider ourselves damned well entitled to collect them.  In the later panels we see what could happen if we continue to deny climate change and encourage pollution in the name of job creation while further enriching the donor class.   And last but not least, our 1/10th of One Percenter protagonist envies what little poor Lucky Duck has left.

Non Sequitur uses old gothic images to portray modern themes.  I could be wrong but the Dook of Earl has Trump’s eyes and one long, long lock of hair.  The Dook has to stir up his base, and a big meteor serves as the metaphor (‘The sky is falling!) for The Caravan of 7,000 would-be Hispanic and Middle Eastern immigrants hiking from Honduras to the Rio Grande.  There are perhaps ten million illegal immigrants already living here more or less permanently, who by and large are self-supporting taxpayers.  Why get excited over a small fraction of one percent more?  I just hope our border guards don’t shoot a lot of women and kids.  That would be terrible ‘optics’. 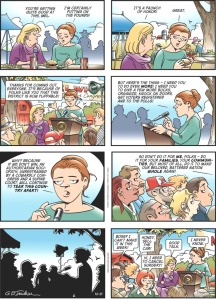 Doonesbury has been following Melissa Wheeler, an Army aircraft mechanic with two tours in our desert sandboxes.  Mel was a sexual assault victim while there, and the culprit was a superior officer in her chain of command.  Her complaints through channels were of course unsuccessful, and many months ago she left the Army to run for Congress as a part of this year’s wave of women seeking office.  Old Joanie Caucus, who cut her teeth working for the John Anderson campaign (remember him?) is her campaign manager and political tutor.  In this week’s installment we see how far Mel has come from her first political speech which was shaky, halting, and hesitant to ask the audience for money or ground game help.  Rep. Melissa Wheeler (D-Somewhere) now stands for what could be, if only we can make the Blue Wave real.   If not, we still have Existentialism, illustrated by Pearls Before Swine below.

That’s not a pretty picture.  Please make your vote count.  Especially if you are leaning Democratic!