I wrote this two years ago and somehow never posted it.  Better late than never?

We are in Pensacola, camped within a mile or two of where we interred a bit of an old friend’s cremains.  Yesterday would have been his 74th birthday.

Kat, the Magic Bugger, and I are two days into our scheduled four week visit to Florida’s Gulf Islands National Seashore campground.  There was rain last night with another cold front moving in today.  The long-term forecast believes today will be the nicest of our visit, except for yesterday …  as Chad and Jeremy put it in ‘64 “But that was yesterday, and yesterday’s gone.”

But that wasn’t his song.  This was his song.    https://www.youtube.com/watch?v=w019MzRosmk

We set out for the beach with a tablespoon and our bag of ashes, parking at Shelter 16.  I wanted a spot above high tide, a place above most storm tides.  Frank Herbert’s Dune series was one of his favorite reads, back in his younger days.  A waterfront dune would have been ideal, but people aren’t supposed to even walk on them.  A nice spot at the foot of a dune overlooking the Gulf seemed just right.  In time a big hurricane will wash away that dune and its vegetation, but until then this is Walt’s beach.  Just behind the dune is the Langdon Battery updated and placed in service in 1943 with two twelve inch guns serving as a WWII shore defense.  Would that I could report that the battery was manned by sailors, but it was a Coast Artillery Corps outpost, then a branch of the Army.  Walt was a Navy guy.  Sorry, dude.

But in Santa Rosa Island’s entire history as a seaport fortification (Civil War to the end of WW II) no big gun has ever fired at a hostile target.   Mankind’s collective memory of this little island is cheerful … lots of fishing, camping, cushy service time during the  Civil and World Wars, and after the Defense Department deeded the land to the National Park Service, the short-term home of a million happy campers.

Come to think of it, I might like to be interred on Park Service land.   But please wait until power changes hands in Washington:  Don’t plant me on no damned Trump golf course. 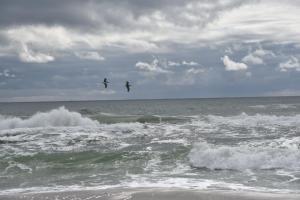 How about that flyover!