Monday we figured it was time to go a step further in boondocking.  We set out for the Sage Creek primitive campground.  Primitive typically means there’s a road to it and nothing more.  This was kind of true; the road was dirt and gravel, washboard with occasional patches of smooth.  Otherwise it was pure primitive, just a vault toilet.  No water, no electric, no sewer, and half a road.

But it was so QUIET out there.  After the guy running his generator to cool the 94 degree heat left the camp all you could hear was jets at 35,000 feet, coyote families singing, and as day turned into night, frogs.

This area is open to the buffalo, and we saw a small herd near the camp on the way in.  There was a lot of their dung among the campsites, big hoof prints here and there, and we gave thanks for having a metal shell around us when came our sleepy time.  But it wasn’t yet dark, we had not dined, and here came the herd slowly working up to our campite.  A big bull with blonde streaks on his back approached within 70 yards of Kat and Jackson as we sat in the shade in our chairs.  He blew (that’s a deer hunter’s term for a snort of disgust they make when a human is too close).  We didn’t flinch.  He didn’t either and advanced a couple of steps to the sun-shield the rangers put up to shade Badlands picnic tables like ours, this one about 80 yards away.  The big bugger then commenced to scratch his head and neck on the support poles, and damned if the whole thing didn’t shake like a palm tree in a hurricane!  Pink barked at his ugly ass.  I hollered at him:  “Come out into the sun, Honey Badger, so we can take your picture.  Kat noted “I don’t think he likes us being here.”

We went into the Airstream.

And then a couple more of these huge beasts marched up into the shade of other picnic table shelters.  The trees had no leaves yet; this was the only place they were going to find shade.  Half an hour passed.  The sun dropped low and the temperature fell.  The buffalo moved on.  We had dinner.  The sun set. 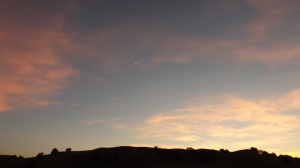