We camped Monday in the Newton Creek campground, 14 miles from Yellowstone’s East gate.  We chose a sunny site alongside the cold, clear and noisy Shoshone River.  This will be our base of operations for our forays into the eastern part of the ‘Stone.

The moment we arrived I noticed fresh buffalo chips on our site.  That afternoon Kat spotted three moose across the river grazing on new leaves.  The second morning Pink flushed a mule deer from the bushes behind our site.  Fishermen appeared the second afternoon, caught a few trout and missed a big steelhead.  Then the Forest Service rangers stopped by and told them and us we had to move:  bears are in the forecast. 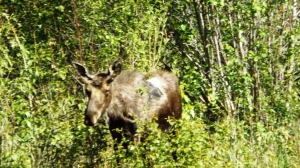 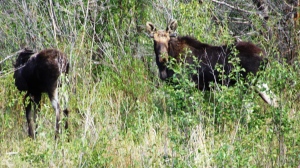 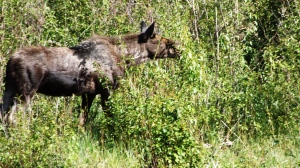 This campground is reserved for hard-sided campers because Newton Creek feeds the Shoshone, and cutthroat trout use the creek to spawn.  I had hoped to grab one of the big ones struggling up those shallow rocky waters for our dinner, but the rangers and the grizzlies had other ideas.  Bear tracks had been found along the river.  Then the USDA ichthyologist counted 110 trout going up the creek our second afternoon at the camp.  Staying was not an option: we were ordered to move away from the bears to the other end of the campground.

This would be our last night anyway, and it’s good to start getaway day with truck hitched to trailer.  The safe campground filled up completely.  We enjoyed a long chat with Rick, our campground host, then fried up chicken and made coleslaw, and polished off the Marionberry pie.  With no electricity we turned in at 9:30 (dark).  The next morning we heard a dog bark while coffee was perking, right before I walked Pink, but that was it.  Bacon, eggs, and cheese grits never tasted better.  The camp host knocked to warn us that a bear had been in camp.  The bear charged a dog, then got himself maced with bear spray.  That badboy then vanished into the woods. 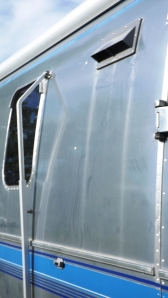 On the side of the Airstream, seven feet up, just below therange vent, visible only from a shallow angle, were grizzly paw prints.  He must have been lured by my old cooking smells just before threatening the dog in frustration, thereby earning his A in Pepper Spray 101.

One thought on “Newton Creek Part 2”