We completed our end cap cleanup Wednesday.  It took longer than expected; the work was more exhausting than I had imagined possible, and we surely couldn’t have done it without son Bret’s help.  Turns out we didn’t nickname him Moose for nothing.  Now that the clearcoat is gone from the endcaps  we will have to re-polish the Airstream every winter, but each job supposedly gets easier.  What a fine word, ‘supposedly’.

To celebrate our group achievement we drove to Driftwood, Texas for barbecue at The Salt Lick.  Their mottoes are “You can smell our pits for miles” and “Barbecue Like No Other”.  They serve old style hickory and oak fired ribs, brisket, and sausage with the traditional sides of cole slaw, potato salad, and baked beans.  For reasons unknown to me they cannot vend birra or vino, but you are encouraged to bring your own.  Just don’t try to smuggle in no Cokes with that ice chest:  they’s a dollar apiece and your server will bring ‘em to your table.  In other words, between barbecue and BYOB, this is my kind of place! 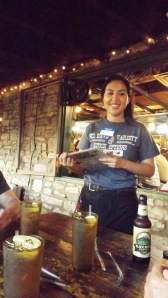 The food was wonderful.  Kat’s rib and brisket plate featured perfectly smoked meats and solid sides.  My beef sandwich, billed “Big as Texas”, came on an 8” X 8” square bun with a cup and a half of cleaver-chopped brisket and  a choice of hot or medium sauce.  Everybody’s plates were loaded to maximum capacity, and I soon realized it would have been wiser to have fasted the previous 48 hours.  But there’s Styrofoam go-boxes even way out in the country.  Kat and I later made a fine lunch off the remains of my half-eaten brisket sandwich.

The food was excellent, the company was even better, and then came the grand finale.  We all worry about our kids for so long, even after they marry and leave home.  Maybe it was those trips to the principal’s office in K-5, or speeding tickets, or internet book reviews.  We worry about their industry of choice in its down times.  We worry about all manner of things, but our kids turn out fine, probably better than we did.  I realized the time had finally come for us to stop worrying when Bret grabbed the check a tenth of a second ahead of me.  He and Allison are doing well, and don’t it gladden the heart!