Another old friend rode off into the sunset yesterday.   The world won’t smile or laugh so much without Sonny Jim Bayliss.  He lived a full, rich, and fairly long life, and was taken away so suddenly he had dinner plans for the evening.  In fairness, a lot of Sonny left him when wife Sheri passed away nine years ago.

We met Sonny and Sheri through Shreveport tennis.  She was the better player, but very few were quicker than Sonny.  Not on a tennis court – he didn’t like running – but during happy hour few could match old Santino’s wit.  Not long after we met, a big group was enjoying a few cold ones in the bar at our old tennis club.  A big guy, who always carried himself like a tough guy, was trying to fix something with a quarter (a job that required a large screwdriver).   This fellow called out to the room:  “Has anybody got a fifty-cent piece?”   With timing that Jay Leno would envy, Sonny called back, “You’re married to one!”

He was an early devotee of Rush Limbaugh, which might explain why so much of his humor was politically incorrect.  He and I used to cook for our tennis group, usually 8 to 20 diners.  Cooking interested Sonny but he had not expanded his horizons beyond grilling.  We did Cajun, then some French, and now and then Italian.  He was strong at chopping and stirring, and as soon as he had nothing to do, he was all over the dirty pots and pans.  The process required a trip to Albertson’s for ingredients, bringing us back to politically incorrect humor.  Usually in Shreveport groceries we’d see people I knew and many more that he knew.  One day the shoppers were all strangers, and I nearly wet my pants on the return trip when Santino dryly noted “I didn’t see one SOB I know back there.  They probably think we’re a couple of old queers.” 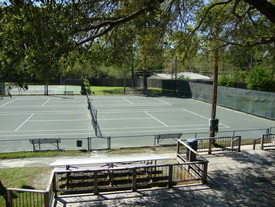 He was a notorious fanny patter whom no one could rein in.  He is the author of the world’s worst racist remark, but 30 years ago there was a lot of that going around, and (white) people usually laughed.  He kept a famously manicured yard, and did all the work himself while wearing starched, pressed shorts, clean shoes, and a collared shirt.   He smoked two packs of cigarettes a day for over 60 years, and when they quit making Schlitz he just switched to Old Milwaukee.

The man was an American original.  All who knew Sonny will miss him.

6 thoughts on “My Buddy, Santino”