Kat and I came to Maine to be cool in July, and so far, so good.  Days rarely hit 80, and nights routinely find the mid 50’s.  There are firs, beeches, and wild flowers everywhere.  Oh, the seafood is so good … it shall have its own post.  Suffice it to say, I think the fish and shellfish choices here equal Pensacola’s and surpass those of south Louisiana. 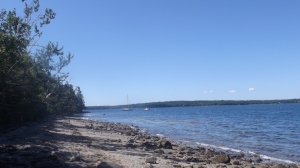 We celebrated Independence Day in a gem of a private campground outside Brooklin, ME.  Long-time reader (and blogger TwoBikes) Al Meyer booked our reservation.  We simply had to get here in time to meet him and his vivacious wife Pat.  Al flew Hueys in ‘Nam as Stogie 26, a company commander in the First Air Cavalry.    Unlike Robert Duval’s deranged character in Apocalypse Now, Al felt little affection for the “smell of napalm in the morning.”  (I of course forgot to ask whether he wore his flak jacket or sat on it.*  Either way it likely was no match for the 7.62 mm ammo issued by an AK-47.)  Camping with the Meyers was like seeing people you’ve known for a long time, yet had never met until now.   Al and Pat are kindred spirits, fellow athletes in days past, Airstreamers now, and old folks who just plain won’t admit it.

The Meyers and the Elders shared a few cold ones, many stories, plus ribs, beans, broccoli salad and the world’s best chocolate ice cream on the 4th.  Al and Pat pulled out early in the morning of the 5th en route to a New Mexico hot air balloon festival in October.  Rumors that the President will make an appearance there seem wishful thinking to some.  To others his presence sounds like a highly unfair way to fuel anything powered by hot air.

Our campground is Oceanfront Camping at Reach Knolls.  It comes with a story.  Sixty or so years ago a fellow bought 25 acres with seven hundred feet of rocky Atlantic beach front.  His dream was to turn it into a campground, and earn his fortune by making people happy, a day, a week, or a month at a time.  He died suddenly and unexpectedly back in the 60’s.  The next generation did not share his dream.  Their daughter did, and Lori and Paul are making grandpa’s dream come true.

Lori did a hitch in the service, as we used to say, where she learned to drive heavy trucks.  From there it was a short step to front-end loaders and bulldozers in civilian life.  Lori employed both to carve the roads and level the campsites.  Paul did the electrical work and cut down hundreds of trees.  Ocean Front RV remains a work in progress.  But it is already a wonderful campground, not to mention a bargain in Down East Maine.  You won’t find a better deal on RV camping within 50 miles of Acadia National Park.  You can’t find better customer service anywhere.

Reach Knolls Campground is in Brooklin, ME:  check it out.  Tell Lori that The Kat and Jackson sent you.  Do that and she may let you borrow one of her lobster steaming pots and tell you how the natives steam lobstahs.  Her recipe sounds scary, but we are gonna try it, and I’ll soon tell you how that went.

2 thoughts on “July 4th with Al and Pat”