It’s a long, long drive from Netarts Bay to Olympic National Park, and do we ever dislike long pulls. Fort Stevens is a big, well-reviewed campground near Astoria, WA, halfway to Olympic, and it happened to have a four night opening in its newest loop, O, beginning the day we left Netarts Garden RV Camp. The fort is another Army base whose purpose was to provide shore artillery defense against warships and, if worse came to worst, to help repel a Japanese amphibious assault in force. Fort Stevens was the only continental US target of an enemy warship in World War II, but the only casualty in that 17 shot bombardment by a submarine was the Fort’s baseball field’s backstop (the screen behind home plate). The sub’s gunners were so accurate that of the 17 rounds fired from their single 5-inch gun, only nine hit land (the Army found exactly nine shell craters) which must mean the other eight landed in the ocean. The crew of sub I-25 survived the war, and its commander and first officer made post-war visits to Fort Stevens and told the local newspaper all about the shelling. He had orders to try to hit approximate coordinates in a midnight attack. Years after the war he seemed miffed that the High Command would send his little ship to attack a base that “could have sunk us with a single hit”. He was a fortunate survivor of the biggest war, and as old William T. “Burn Atlanta” Sherman might have told him, “War is hell.”

Yet travelers do not live by war alone. We two like to visit Road Food favorites, and two of them just happen to be near Fort Stevens. The first was Bowpickers, a beached fishing skiff converted to food truck duty. The menu offers one item: Fish ‘n Chips, with a wrinkle. Bowpickers does not use cod or haddock; every fish fried there in the past 18 years has been Albacore tuna. It makes for a dense, slightly dry piece of fried fish, but they do a great job with the beer batter and steak frites. We had heard horror stories about queue length, so we became Saturday’s first customers. The cook told me where to stand to start the line, and explained she couldn’t cook until the fresh tuna rolled up. Kat and I struck up a conversation with a couple from Sequim (say “Skwim”) 80 miles to the north, there for their first visit. Road Food says Bowpicker is “worth a trip from anywhere” which to me is a bit much, but Kat agrees with Road Food’s high praise. 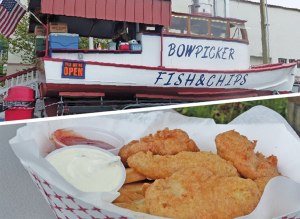 The second restaurant, Norma’s, is in Seaside, a lovely old beach town that was and remains quite touristy. Kat enjoyed a beautiful Crab Louis which held at least $20 of Dungeness whole claw meat (at local retail prices) and was way too much to finish, so she ate the crab and left much of the lettuce. I had a very good BLT with sourdough bread, thick applewood smoked bacon, and a Kroger tomato (the sandwich deserved a flavorful heritage!). A cup of clam chowder offered a third Pacific version not bacony, or overly clammy, but while chock full of clams might have been more about potatoes. And that’s not a knock.