Kat and I just spent four lovely days at this Corps of Engineers Park on the shores of B. A. Steinhagen Lake between Jasper and Woodville, Texas.  The sites are mostly well-spaced with 30 amps and water for the princely sum of $9 a night with your America the Beautiful card.  Nobody played loud music, and despite spring break, we saw (or heard) no urchins.  The pads are paved and the streets are just that, fine places to walk or ride a bicycle.  Woodville is a nice little town with a Wal-Mart, a good brake shop, and a fine and inexpensive source for some of the best chicken fried steak anywhere.

Steinhagen is now close to 70 and had been expected to last only 50 years.  Shallow lakes tend to fill up with silt over time.  This is unfortunate because civilization develops around a reliable water supply.  People become accustomed to fishing and pounding Budweiser on them, power plants are built to rely on water to drive turbines as steam, and nearby towns count on the reservoir for water.  For a couple of decades the Corps has worked hard to keep this lake functional.

Their mission became tougher with the arrival of invasive aquatic plants.  The most common are water hyacinth, alligator weed, hydrilla, common and giant salvinia.  Man has fought plants with rakes, lake drawdowns (during the coldest winter weather to try to freeze it), and herbicides.  Rakes don’t work at all, and global warming’s winters are so mild that this lake hasn’t frozen in over a decade.  The poisons work most reliably so a fleet of airboats spent 6 or 7 hours a day buzzing around and spraying weed juice.  The boats are powered by V-8 auto engines and piloted by hot rodders.  Their sound is close to that of a Ford Mustang with a big motor accelerating AFAP from a traffic light, and sound carries quite well over water.  Still, they are fun to watch.

The Red Sled whispered to us in the WalMart parking lot.  It said “Sshhhhhzzz”, a sigh demanding an emergency brake job.  It turned out to be just the front axle, and the last shop that replaced the pads used some designed to make no noise before wearing out.  The rear axles have the same pads, with maybe half their life left.  So what you gonna do?  Pay the man and ask about the pads next time we rotate tires.  We had feared worse.

Woodville’s Magnolia Bar & Grill serves an outrageously good chicken fried steak with mashed taters and cream gravy.  I love that poison!  Kat loves fried catfish and MBG does them very well.  Their prices are right, and this is the rare eatery whose auto-calculated tip choices (15%, 18%, 20%) are based on your tab before sales taxes.  It’s my kind of place! 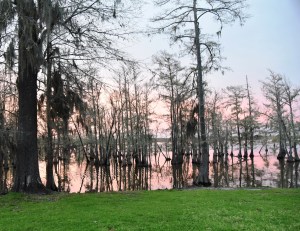 As a bonus we ran into beautiful weather following a big rain event.  The result: one magnificent sunset and a fine spring morning captured by Kat and her trusty Nikon. 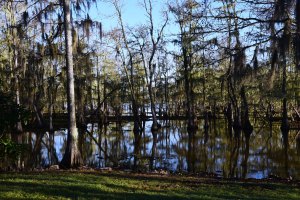